#1, it's konami. if they have paseli why would they make the payment option anything otherwise
#2, anyone can buy paseli. just buy bitcash from SEA gamer mall and then put it in your konami account.
#3, the tickets are the exact same price as arcade credits. which, if you ask me, is a pretty good deal considering all of your scores and unlocks transfer between eacloud and AC. plus you get to play standard and blaster start (neither of which exist in the US)

i don't understand why people are still expecting konami to pander to non-japan countries in 2017. it's KONAMI. it's not going to happen unless they very badly want it to.

PASELI is the worst thing that's ever happened to BEMANI? it's not made for you. it was never made for you or anyone outside of japan. the only reason we're using it in any capacity is because the US does not get a region for anything but DDR, and if it did everything would be paseli-free. japanese players only reap benefits from paseli.
Glad I'm not the only one thinking along these lines. Yes, it sucks that PASELI based features are blocked from JP BEMANI games that are at Round1 (I've always been under the impression that this is because of whatever negotiations Round1 had with Konami to be able to have the games here in the US, but I could be wrong on this), but at least we HAVE them. And if PASELI (or some other equivalent) didn't exist, how would we be able to pay the fees necessary to play the eacloud games? The only other option is a Japanese credit card, which I have a feeling none of us have (except for the users on this site who live in Japan). Also, Konami could very easily have implemented IP blocks to prevent non-Japanese players from playing easily (I hear a lot of Japanese MMOs like to do this), but yet, they've chosen not to (though I still admit I'm surprised this is the case for SDVX).

Personally, if I lived in Japan and went to arcades regularly there, I would have signed onto PASELI once it started being supported by games (before it was required for extra features), since I don't like carrying around a bunch of coins.

One other thing, all MMO like games (I consider the eacloud games to fall into this category) have limited lifespans (some are just ridiculously long). All of the time/money invested into these games will eventually be gone. That is no reason not to play them. If you enjoy them, play them.

Probably because Konami has "pandered" to non-Japanese countries with their Bemani games (i.e. Paseli features are all included with a regular credit in the Korean version of IIDX, and I would assume the same would apply to the SEA/Korean versions of SDVX as well).

Also, free-to-play MMOs are very popular, period. Heck, in Japan, you have Phantasy Star Online 2 (which, funny enough, has IP blocks, and you need ARKS-Layer to access the game outside Japan, but I digress), where you have to pay an optional monthly fee for exclusive items/extra storage/etc. A pay-to-play game like Final Fantasy XIV is a dying breed by comparison.

Also, keep in mind that the only reason Paseli even exists was because of Japanese regulations (in other words, Konami didn't get the full profit from a regular credit, so they invented this system so they could get 100% of the profit every time someone paid for a round that way. In return for that extra money, the player would get extra features). There isn't a need for Paseli anywhere other than Japan because of this.

I will give them credit that the unlocks you have in this "home" version transfers to the arcade version, but it's absolutely useless if you live in, say, Tokyo, where you're within walking distance from the nearest arcade (and as I've mentioned earlier, you have all the songs in the arcade version rather than just 300 in the "home" version). It's near impossible to defend the ticket system because, as I've said earlier, it ruins the purpose of playing the game at home. Like you folks mentioned, it costs the same as a credit in the arcade version, so again, why would you want to pay for just one round of an inferior version of a game that you can play at the arcade for the exact same price?

There's a difference between "We need the monthly fee to help maintain servers" and this being a desparate cash grab. Konami could have very easily made this game (and Infinitas) similar to Rock Band where you got a bunch of songs on the disc (or in this case, the .exe file), and you could have paid for DLC packs containing songs from newer versions. Unfortunately, that is clearly not the case. The fact people find what they are doing "fine" is a bit worrying because it could mean other companies could follow this model of business in the future if this is successful. At least with Infinitas, you only have to play a monthly fee to play as many times as you like...

I totally agree with you! I think most Japanese gamers are just accepting anything that KONAMI throws at them and not being aggressive enough (probably due to cultural/lifestyle standards) about having a better home gaming experience. To me, Sound Voltex Booth III -GRAVITY WARS- (PC) is just an extension of the AC version, only this time, it can be played within the comforts of your home rather than having to travel to an arcade. You pay the same pay-per-play price as in the arcade to play this game, the only difference being the INFINITE mode (requires a monthly 2,138 JPY subscription), which allows you to play as much as you want, but WITH pretty serious limitations...perhaps they should have called "INFINITE mode" -> "LIMITED mode". This monetization is once again good for the company, but bad for the consumer.....and the worse part is, once the servers are shutdown, you will no longer be able to play the game no matter if you've paid X amount of money for X amount of years, not to mention, if you bought the SOUND VOLTEX CONSOLE -NEMSYS- Ultimate Model Controller, then you'd be stuck with a nice looking paperweight.

The game is made for Japanese players, right? Well, surely I can see how badly Japanese companies fool and take advantage of Japanese consumers with these downright greedy monetization tactics. If the situation was flipped (Konami's mainline coin-op/business/etc. operating exclusively in the US), and Konami tried to pull this shit, many people would wise-up and make both formal and informal complaints; at least we are aware of how businesses operate this day and age and aren't afraid to voice our opinions (eg. Star Wars Battlefront II) toward the company directly.

That being said, on a positive note, I do appreciate that they are using the SDVX III -GRAVITY WARS- AC system interface in its full glory...it's just like playing the machine.
Support Project Hope: IIDX CS Revival -> beatmaniaIIDX ULTIMATE CS

Last updated: 2018-04-25 08:58pm
I hope they update the PC version someday so SDVX IV songs can be played at home too. (That includes Policy Break and the recent BeatStream songs but I don't know if that's possible)

I don't suppose you can put your notebook sideways to match SDVX's vertical screen dimensions?
I'm concerned that it'll affect its performance.

yes, that's a thing that many people do

if sdvx4 stuff gets released at all, it'll probably be after sdvx5 releases

I meant, I don't know if something will happen to my laptop if placed sideways for too long.

I think when SDVX IV cloud will be announced with SDVX V AC. Mahjong Fight Club cloud updates with the AC version, so KONAMI **can** update the major cloud version as well.

Okay, I just got my SVSE5 controller and got SDVX Cloud. I just had my first playthrough. But I'd like to ask a few questions.

1. The frame rate was noticeably lower compared to the AC version (which wasn't that a surprise). How do I fix this? I need better CPU right?
2. The knobs had less sensitivity than that of the ACs I used to play on. I wonder if there's any way to resolve that too, because this difference in sensitivity will likely give a bad influence to my final scores.
3. Where can I buy more tickets? Don't worry, I have a Japan-originating Konami account already.

1. What kind of system specs do you have? I'm not sure whether SDVX pushes the CPU or GPU more.
3. There's a ticket button on the launcher that'll take you directly to the place where you can buy tickets. Alternatively, from the website, the button on the left in the second row is the link to tickets. The button next to that links to a place to buy the basic course for Infinite mode.

Am I missing anything else?

Do you have a graphics card?

If you're trying to run it on Intel HD Graphics on that processor, I think it will struggle to keep up with the game.

Konami recommends a graphics card with at least 512MB RAM, additionally noting that any card from 2015 is more than capable of running the game.

On the search engine in the start menu, type in "PC Info", and click on "About Your PC". It should have the info on your GPU and CPU. and how much ram they have.

Okay, I ran "dxdiag" in the search bar and checked my display settings.

Now, because I'm using an LG notebook, I'm not sure if the CPU and GPU are upgradeable. Whether it's possible is more important than how long it takes. I can provide you the model # if you'd like.

You're probably better off getting a newer laptop that has more power, and making sure it has an Nvidia graphics card built-in (getting an AMD-powered laptop may be cheaper, but they're nowhere near as reliable; I should know from experience... ).

Of course, this is assuming your LG notebook's a few years old. 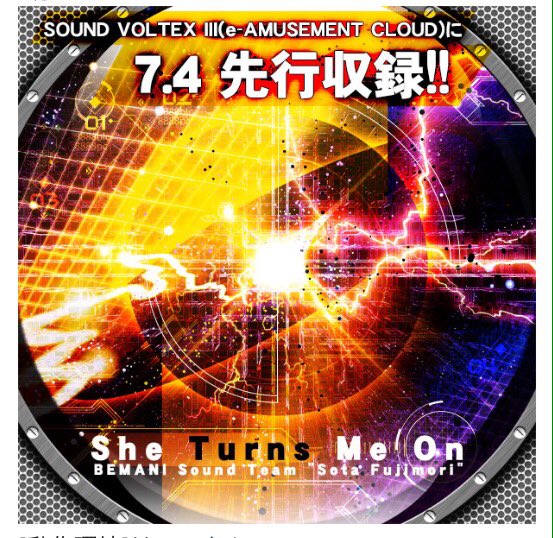 A new CLOUD-exclusive song from the synth legend himself has been added today:

- She Turns Me On / Sota Fujimori

How do I purchase Paseli outside of Japan? BitCash is the only way, right? There are kiosks nearby but I'm not sure if they'll give me that 16-Hiragana-alphabet sequence to get the Paseli.

If SDVX V gets released, SDVX IV Cloud should be released as well.

The next CS exclusive is gonna be a banger!

Another new CLOUD-exclusive track from the one and only Sota Fujimori added today. 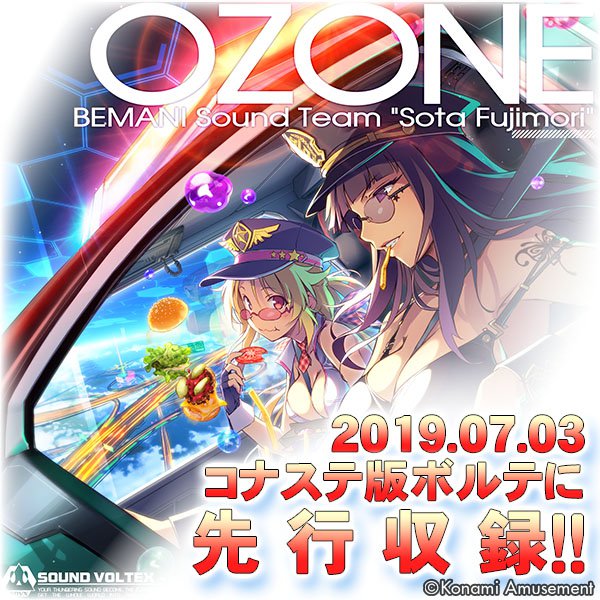