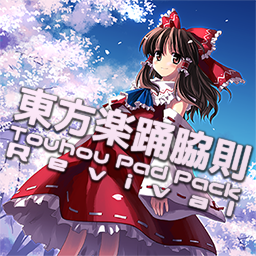 
Hey everyone! I actually released this pack over a week ago on my youtube channel but I haven't been able to get around to posting it here until now. Whoops.

Anyways, if you didn't tell by the title of the pack, it's actually the first pack (almost) entirely restepped and redone from the ground up. Although it brings 27 songs from the original pack, it also includes 7 brand new songs as well as 1 song brought over from Touhou Fujinya ~ Touhou Pad Pack Rebirth. Only 2 songs from Touhou Gouyoukyou ~ Touhou Pad Pack was not brought over for their own reasons: Marisa Tanked My Score with an Incredible Hand, and Furadoru.

I decided to do this because, to my horror, people were still playing my first pack. So I thought it would be best to redo the first pack so people can enjoy the same songs but with much higher quality stepcharts. It was also because it's been 9 years since I started on this pack series on my own, so I thought it would be great to celebrate with the pack that started it all :V

Most of the charts are done by me, but some of them were done with the help of CondorTalon, who you guys might know as someone who's been of a huge contributor of many of my packs.

Anyways, enjoy! And just to note, the pack ratings are judged on the ITG2/old-DDR scaling.
Latest Release!