Yesterday me and my roommate have found a really peculiar Taiko no Tatsujin arcade machine in São Paulo, Brazil. One like this: 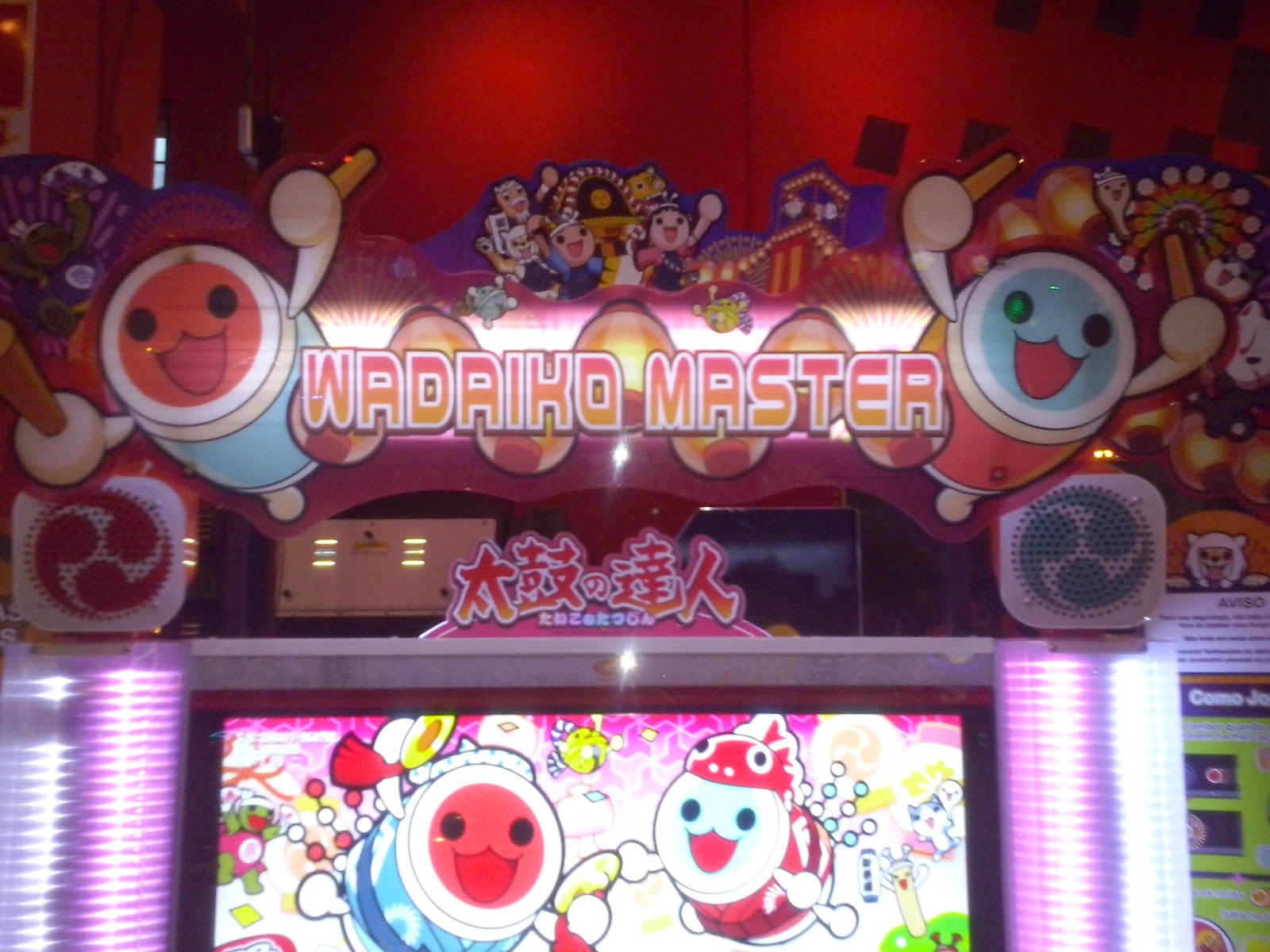 That alone was quite surprising, but what intrigued us the most was:
- A lot of its interface was in Brazilian Portuguese! Even the instructions were neatly translated.
- It had a Brazilian pop* folder with three songs (Hoje é Domingo, Escatumbararibê, Samba Alegria), all of them shown at the cabinet's side panel.
*We've failed to recognize any of them though. Only today I've confirmed the first two are obscure public domain children's songs, and apparently the third is actually by sampling masters AYA!
- It had no J-music folder, and all the others had very few songs. (About 3 Classical, 3 Folk, 4 Vocaloid, 6 Game music and 14 Namco Originals)

After some investigation we've reached this Taiko Time article. The previous pictures are all from said entry.
We can confirm the cabinet we found is at Momoiro version and had no network connection nor Banapass readers.
We're also guessing all of the machines mentioned were imported(?) by the same arcade franchise.

We were in a kind of a hurry so we only played two rounds and barely took any pictures. Here are the ones we took:

(Instructions, folder and difficulty names were translated, everything else wasn't. Oni was hidden and was kept untranslated.)

(Result screen also untouched. The "Thanks for playing!" message afterwards was translated though.)

(All rhythm games are kept at the same section. Sadly Wadaiko's volume was set to much lower than the rest.)

All in all, it didn't seem like a simply hacked machine. The Brazilian songs are 'safe' additions, and everything else felt very 'official' to us.
It almost felt like... a location test of sorts? Ok sorry that's too far-fetched.
Is Bandai Namco actually trying to expand its market, or is it all a really well done mod?

That's super cute! It would be great if they were to license popular Brazilian hits or some songs that fit into the game like Samba de Janeiro to get people interested in it.

The untranslated japanese does make it feel like a location test. Is the brazilian arcade scene good enough to invest in it?

Last updated: 2014-10-05 03:16pm
Quote: DJ Tomoe
Is the brazilian arcade scene good enough to invest in it?
Not really.
I'm guessing it's as bad as everywhere else in the world that's not Japan, which makes all of this even more strange to me.

The largest arcade franchises' prices are also stupidly high, to the point of discouraging players.
Particularly, I don't see Wadaiko going too far with them charging over $1.00 for a round. (= two songs)

Also, rhythm games in particular don't seem to have that many fans around here; the most notable community is of the Pump It Up players, and even that has been on a steady decline over the last few years.

Perhaps - and that's a really wild theory - Bandai Namco is doing this considering the influence of Japanese culture in Brazil.
(which isn't *that* big, but I can imagine it being misleading. Brazil has the largest population of Japanese descendants outside of Japan after all.)

EDIT: Here's a video of the songlist (credits to pikaby):

(they skipped the Brazilian music folder for some reason though...)
>>RandomBemani

Any updates on this? Would it be a good idea to try and contact Namco's Southern American division to ask them whether this is official or not? Also, if you could add the exact location to the arcade map, that would be great (in case other locals wanna come check it out).

São Paulo locations updated here and here - thanks for adding the Morumbi one, Aposke!
I don't know for sure which arcade in Rio has it but I'll bet it's this one.

I've played at the São Caetano location last Saturday and nothing seemed to have changed.

About contacting Namco, I wonder how hard it is to get in touch with their South American division... I thought of contacting the arcade owners first.

Also, Taiko Time and this Taiko wiki say that Wadaiko Master machines were found in... Kenya? What the...?
>>RandomBemani

Quote: GariK+
Also, Taiko Time and this Taiko wiki say that Wadaiko Master machines were found in... Kenya? What the...?
Yeah, I noticed that as well. I wonder who their source is... I didn't even know Kenya had arcades at all! Kinda curious to find out whether there's more interesting stuff over there...

But yeah, if you have the chance, ask one of the arcade owners, or someone who's working there. Usually big arcade chains have employees whose job it is to bring in new games, have talks with manifacturers and delivery companies, stuff like that. Maybe you can talk to one of those people. I'm kinda afraid that, if those games aren't genuine, asking Namco directly would lead to a lawsuit or something against the creators/distributors, so asking suppliers/employees is probably a better first step.

I played it yesterday in Ceará, Brazil. It was so much fun~

So I went to the Morumbi Hot Zone arcade today. I took a long, hard look at the Wadaiko machine and played it throughly. I can confirm everything stated above remains true for the game I played.

I think it's safe to say this is really Bandai Namco stuff. Out of the three songs added under the brazilian songs section, one of them is actually owned by Namco and the other two are public domain - no copyright issues here. I could also notice various BANDAI NAMCO trademark signs located at various parts of the cabinet, such as this (low quality - sorry) picture. When I asked an employee about the cabinet, all he knew was that it came from Hot Zone's HQ in Rio de Janeiro.

However, I think the most important thing I was able to find out was a trademark licensing report for Wadaiko Master filed by Bandai Namco. I might try to get in touch with their brazilian representatives and if I get anything I'll update this thread, but I think this is actual proof that Namco is behind this.

For the record, at the Morumbi arcade, one credit costs currently R$ 4,40 (about $ 1.46 USD) and lets you play only two songs. Despite that, the machine remained pretty popular through the three hours I spent there. By the way, the songlist is still the same as the one posted above.

Quote: Kouma
However, I think the most important thing I was able to find out was a trademark licensing report for Wadaiko Master filed by Bandai Namco. I might try to get in touch with their brazilian representatives and if I get anything I'll update this thread, but I think this is actual proof that Namco is behind this.
Any updates on this yet? It'd be really interesting to see if Bandai's planning to make Taiko more global if the machines are doing well in Latin America.

Amazing dude! But i need to go to São Pautlo to play this machine, hahaha
This taito Drum is nice and reccomended for drums machine players, I hope that get realesed in others locations around the Brazil like Rio, ES and Minas.

Any news i will looking forward.
Siga me os Bons..

Unfortunately, the machine only has 32 songs. Since the manual says "more than 200 songs" (Momoiro Japan had 321 songs at launch, Asia had 227) then maybe someone could ask the supplier why there's such a big difference between what the manual says and what the game actually has? This is the supplier's Facebook page https://www.facebook.com/MaticEntretenimento/
Register Log In Back To Forums