I really was not expecting to like this 灼熱Beach Side Bunny remix.....but I actually do. I won’t be surprised if this pops up in HEROIC VERSE or any future IIDX game after that.

Is anyone else experiencing lots of technical issues with Dance Rush cabs? At my local R1, literally every time I go there, one of the Dance Rush cabs is down (usually at the black screen with white text and one of the things like MOTION SENSOR having "ERROR" next to it) and often times the pads glitch out, or the Down sensor stops working, or what have you. This has been going on for months now.

Sounds like both world class R1 technicians sleeping on the job and general mistreatment of the machines. 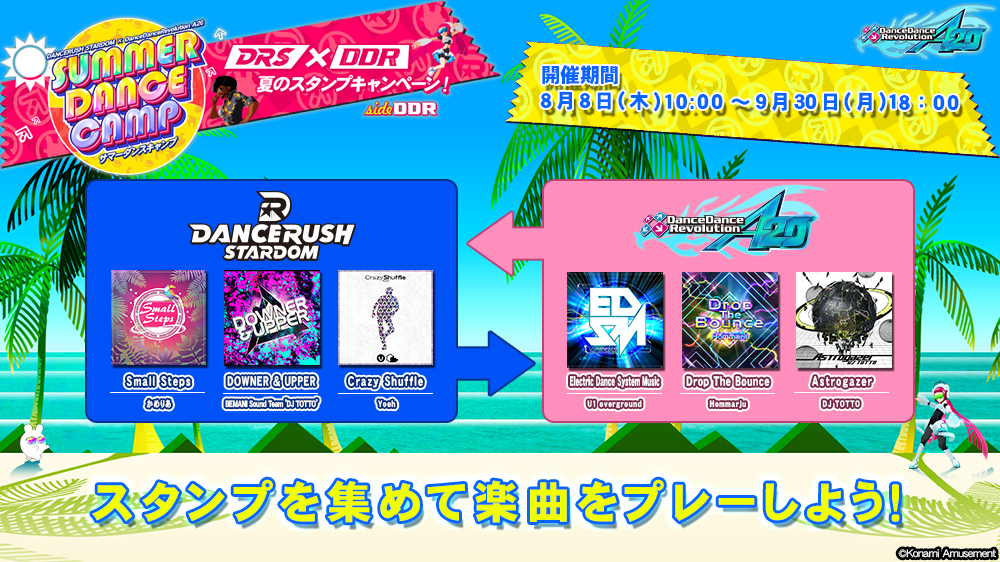 DDR x DANCERUSH crossover event! The way it works, mostly lifted from the DDR thread:
-For each day you play DDR or DRS, you get a stamp.
-If you play DDR and DRS in the same day, the second game gives you two stamps, so you can get a maximum of 3 per day; one in the first game you play, two in the second.
-Playing at all during this event unlocks EDSM. Collecting 3 stamps within DRS unlocks Drop The Bounce. Collecting 7 stamps within DRS unlocks Astrogazer.

The timetable says next week's songs will be by MK and TANUKI(!!!).

Not even a Stardom remix? zzzzzzzz

The songs for the next week haven't been formally revealed yet, but according to Night & Day's unlock challenge, the first one is Wowie Zowie! which is a crossover I didn't know I needed but oh my god I need it

Next week's artists are HyperJuice and Dubscribe. They're really getting a lot of interesting BEMANI debuts this year!

And the reward for reaching the end of the event is... a ONE MORE EXTRA STAGE!
Set Me Free / kors k vs BEMANI Sound Team "L.E.D."


But the chart though...

I can't even process the level of difficulty this takes. Just... wow.
ZIv Mod Squad: "mfw things do"

"Hey, what if Sound Voltex but for your feet?" - the person who designed this chart

I really wonder where chart design is going to go from here. Maybe we'll finally see a third difficulty in the next installment of DR?

I can't even process the level of difficulty this takes. Just... wow.

Also they know this is DRS and not DDR, right? That entire middle section looks unfun.
Quote: MENDES
The year is 20XX, everyone dances to TAS levels of perfection. because of this matches are solely decided by how little baby powder the individual player uses

One More Extra Stage being forced to Normal was an evil thing to do. Granted, when I unlocked the song normally, I got 7 Bads on the Easy chart, so not having Normal forced wouldn't have helped me any...
Register Log In Back To Forums