Last updated: 2014-01-03 03:48am
I'm just because...I'm just. I don't even know really. I'm just wondering if people know something that I don't about central. I'd imagine there are other locations around the state but it would also be a several hour drive for me (that I'd be willing to take but fucking gas and time hurts that one most of the time).

The only three machine location I've come into contact over the last seven or so years have all dried up but one. In the Tinseltown location in Benton, there has been an off-and-on existence of a dance machine but it's gone south in recent years. Back in '06-'07 there was an ITG 2 R23 machine in there alongside a Stepping Stage Superior 3 machine. Probably one of the only times I've seen an arcade worth it around here. Later on there was a Pump NX2 that made it into the bowling alley across I-30.

Then I got lazy and busy over the years.

Back last year until about April or so there was a SuperNova machine in the Benton location but it eventually vanished. I was the only one that seemed to be putting money into it (or at least I was the only one making high scores with my fat ass). The Pump machine apparently vanished completely some time ago. The only real place in central that I'm aware of is the Rave movie theater in West Little Rock which holds a lonely SuperNova machine that, when I tried last here a few months ago, was in poor shape for side 1. Hadn't really tried since and honestly it doesn't sound like very many people are outwardly interested around here...at least publicly anyways.

Just wanted to see if people still enjoy that or all...or if I should just assume that people stay to their homes playing Rock Band and Singstar Country, if that.

Have you heard about the Z82 Retrocade in Sherwood? That place gives me hope. I mean, a near-weekly cosplay competition somewhere in Arkansas?!? Mind=Blown.

Judging from a Youtube video I pulled up after Googling the place, it seems to have a DDR Extreme cab there, with a whole bunch of classic arcade and pinball machines.

$7.50 for entry and all the machines inside are free play? Not bad

WHOA, there are some crazy rules if you want to play DDR. One of them being:

What the hell? That's...quite a strict rule

I've never heard ANY arcade restrict someone from playing DDR because they are 'too short to play'.

Last updated: 2014-11-24 01:34pm
Maybe they got too many people that complained about kids stomp killing pads/not knowing how to play/wasting time/or there is a policy where kids pay less and they are cheapskates not letting kids pay a smaller fee to pay. Could be many things.

Safety could be the main reason though. Don't want no one giving a sue over a dead dance game.

Edit: I say kids a lot due to the height. In no way am I saying all kids are that tall, but for the matter of generalizing, then yes, safety is the point. Can't have a toddler walk on the dance stage and fall off it. Yes, parents can do a better job, but that's how it is.

While those points are good, the thing about this is that typically most arcade machines are readily available to play without really any restrictions on them, unless the machine comes with a warning label to the side as well as explaining why said machine requires a certain requirement for the player to follow, for example those arcade machines that are enclosed that have full 360-degree motion to it or ones that have some form of motion that can cause sickness and/or bodily injury if they don't follow the rules. Those machines I can understand because they have mechanics that can't be easily controlled by the player as opposed to a regular joystick and buttons.

DDR on the other hand, while it is a machine that has the player move around at high speed depending on what they play, isn't really much different than other types of games that require full body motion, like those Jumpin' Jackpot machines, Spider Stomp, and a few others that have that requirement.

I am going to assume that because the arcade doesn't want to deal with liability issues that could come from little kids or even some players that can get injured from playing (which DOES happen), they set this restriction to try and eliminate that issue and reduce any collateral damage done to the machine and/or player. That and the fact that the machines are all set to free play, I can see why they would go this route. Still, to me it's just strange to see a height requirement for DDR. First time I've EVER seen anything like this.

Dang, Sherwood's out of my driving range. Don't know if DDR exists in Fayetteville or Fort Smith, but I could realistically drive to either of those two places and do a sort of meet-up, since I haven't actually met anyone from the site in real life yet.

Ok, how about the arcade not wanting to have to maintain as much? Kids stomp on them like no tomorrow at times and the amount of people who are gross and drop soda/popcorn/food/drinks on the pad/monitor is an issue (hint: it's mostly going to be a kid).

DDR doesn't make much money, and with the arcade being in all free play...

Quote: Aegis
Ok, how about the arcade not wanting to have to maintain as much? Kids stomp on them like no tomorrow at times and the amount of people who are gross and drop soda/popcorn/food/drinks on the pad/monitor is an issue (hint: it's mostly going to be a kid).

DDR doesn't make much money, and with the arcade being in all free play...
Quote: Max
I am going to assume that because the arcade doesn't want to deal with liability issues that could come from little kids or even some players that can get injured from playing (which DOES happen), they set this restriction to try and eliminate that issue and reduce any collateral damage done to the machine and/or player. That and the fact that the machines are all set to free play, I can see why they would go this route.

I think you forgot to read that last bit of paragraph on my post. Ending this discussion to stop going off track with the thread's topic.

Going as off track in an Arkansas thread in a dead forum...not seeing a crime if we go off track. If anything, then we are adding something.

I skipped your post because the whole post looked like what I had stated before so I didn't even bother finishing. Excuse me. I'll be sure to read what is posted next time completely.

That Z82 arcade is about 30 minutes of a drive from where I live. 15 from where I work. I might stop off just to see the condition of the Extreme cab. I need to stop being lazy - I've known about the place for a few months now. 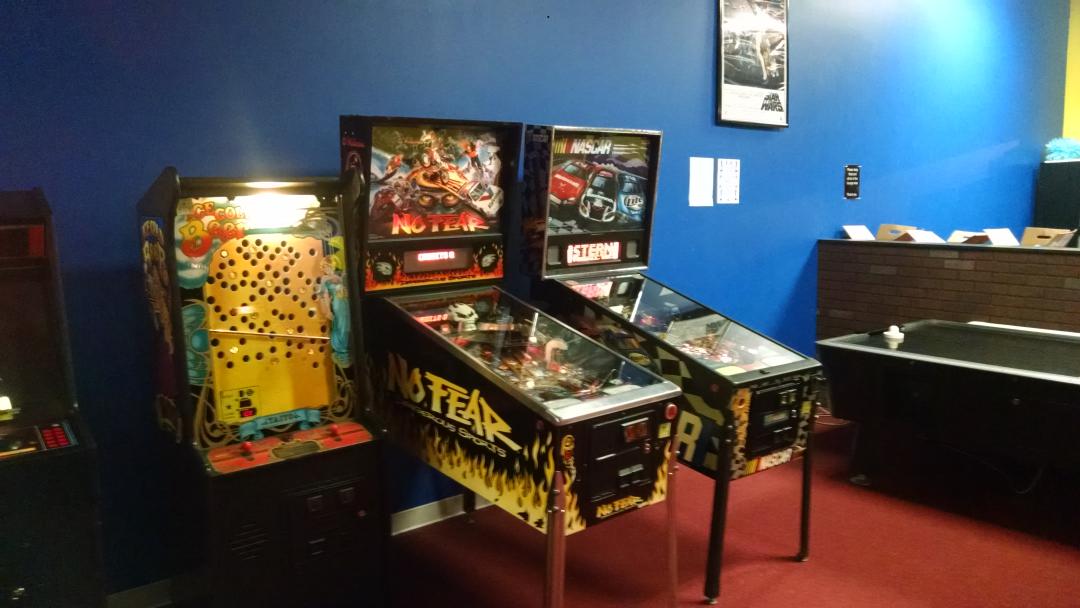 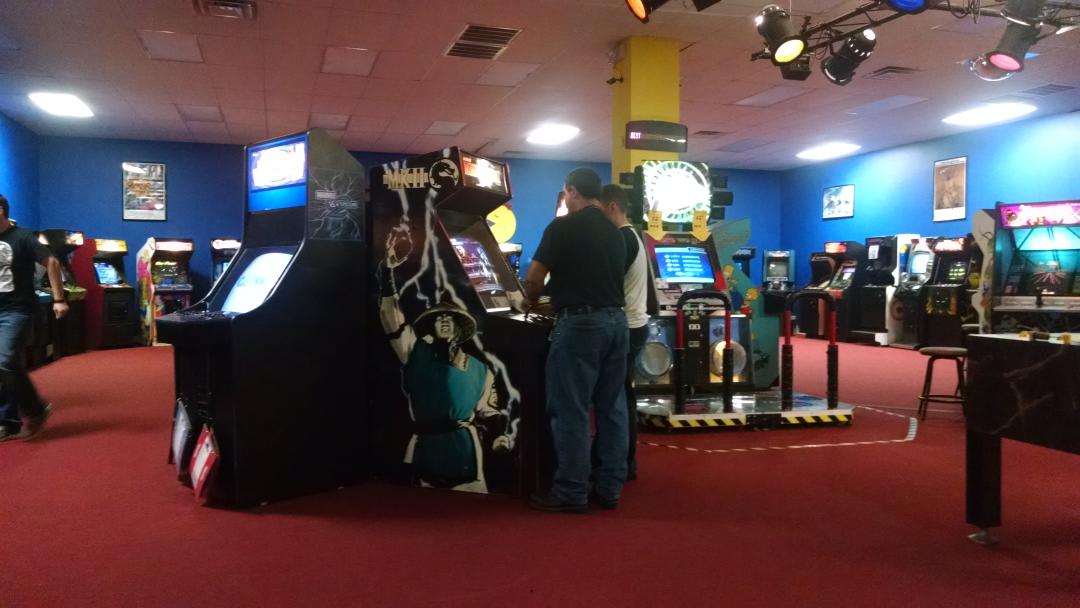 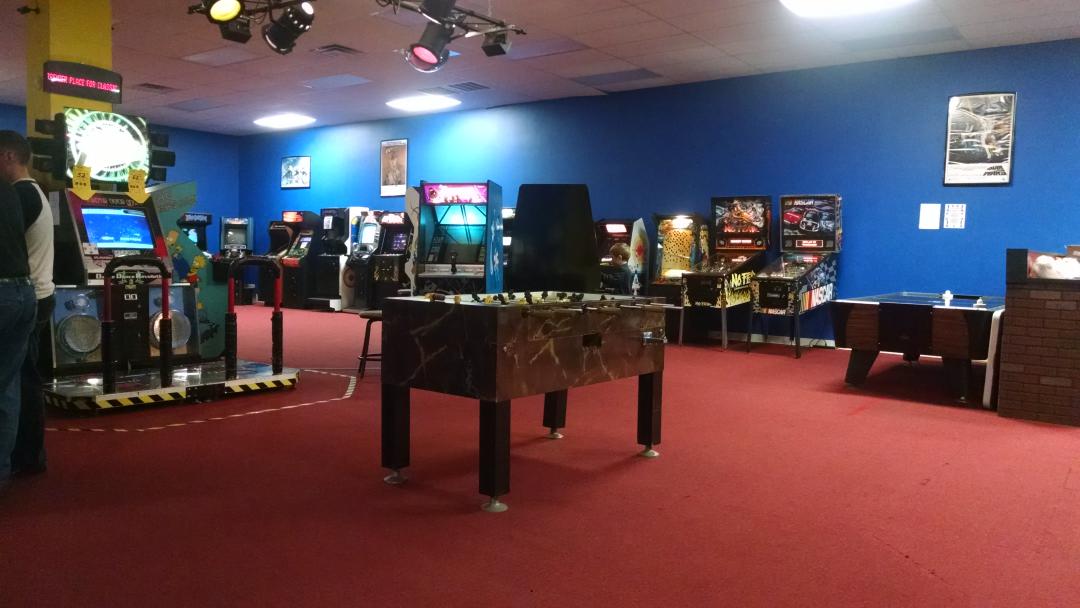 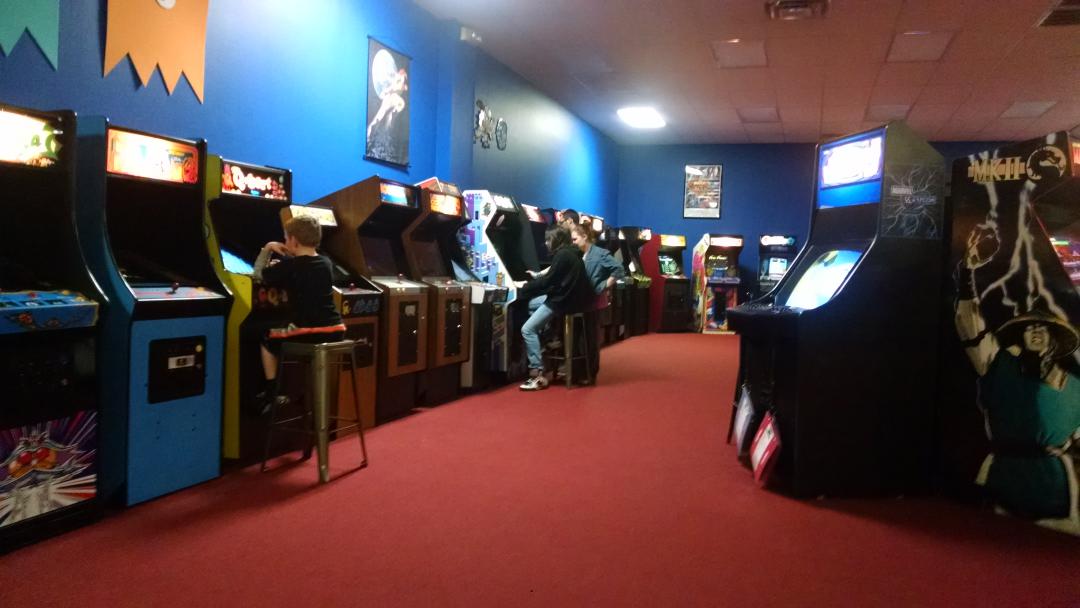 I can honestly say I had a very good time. For the locale, you will certainly find nothing better by leaps and bounds. That was 7.50 well spent.

The people handling the place seemed very knowledgeable and they're not there for the profit more than trying to spread what arcades are. Tournaments, daily high scores, incentives to play by having play guides on the actual arcade cabinets - you name it. I probably spent half my time talking to him relating about games and moreover technical things in relation to it. Evidently he originally hails from North California and worked for quite a few gaming companies (I know Atari was dropped among others) before coming here which explains a lot of his know how.

The DDR Extreme machine is in -excellent- condition. It is very well taken care of and it has been recertified not too long ago for 100,000 working hours, evidently. One of the partners there, I believe his name is Daniel...I think that's what he said I was running out the door because I lost track of time...well anyways, he's got spare sensors standing by just in case among other things. In terms of total people I saw there for DDR it was zero tonight but talking to him he says it picks up on Friday and Saturday because the hours are extended (5PM-12AM and 12PM-12AM, respectively). 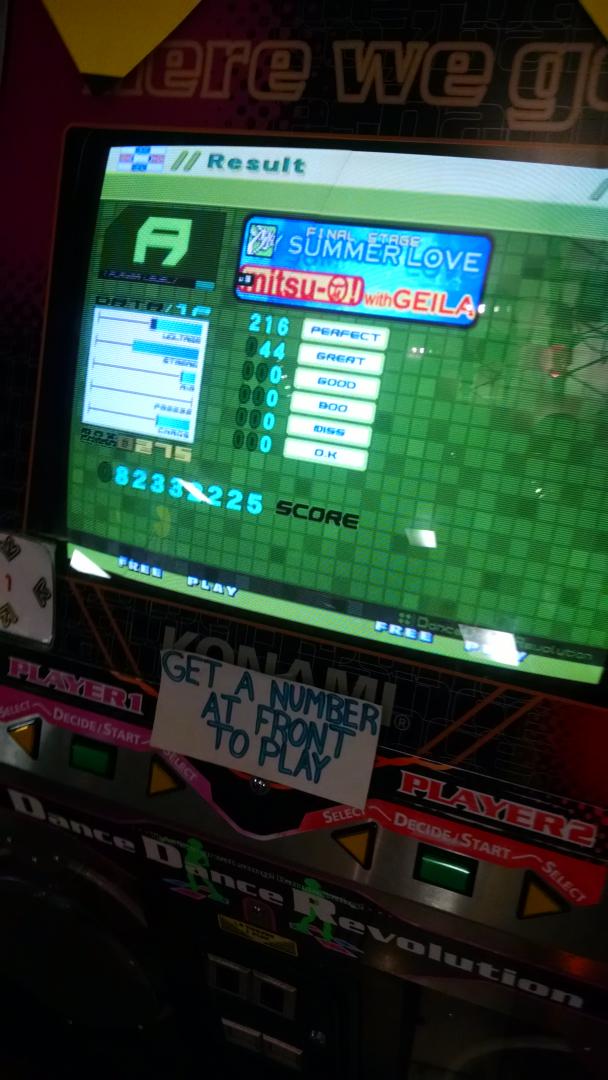 Which is why that little -1- thing is present. Since we're not dealing with coins he laminated a whole bunch of those on the left side there to keep track of whose turn it is. Yes, I suck, I haven't played in a year plus and I'm fat but whatever it's great fun and I'm definitely going to be checking it out again. Maybe this coming Saturday? I dunno. But I'll definitely be back and I would definitely tell anyone who's passing through to look into it and see for yourself. It may not have everything rhythm under the sun but he may very well be open to suggestions in the future. He's trying to get DDR more popular to the point of tournaments. His last was a CvS2 one which had a turnout of roughly 22. Not too bad.

EDIT: This is Daniel.

I do love me some Z82 Retrocade. I'm not the only music game person around, I know of at least a handful of others.

Connor's house definitely sounds like an option. I sometimes travel to Dallas to play Fiesta 2 at Dave and Buster's, but I'm more interested in Round One that opened not too long ago in Arlington

As far as music games I play, I'm pretty much open to anything that isn't touchscreen related. I've got KeyboardMania, IIDX, DJMax Trilogy, Pop'n Music on console/PC. Heh, I kinda even like that Tuba Croc game.

Sorry to bump. I just found out that there is a new "Dance Dance Revolution" location at Big Rock Fun Park in Little Rock, AR. I'll be sure to check it out tomorrow night.

Dave and Busters in Rogers opens on February 5th, my friend is installing TVs there and sent me a pic of the Prime 2 LX cabinet!

Quote: connormgs
Cabinet is running Prime as of a few months ago, let's play.

Dave and Busters in Rogers opens on February 5th, my friend is installing TVs there and sent me a pic of the Prime 2 LX cabinet!
I only live about 2 hours from Rogers. I might make the trip one of these days.

dedicab up and running soon.