Hello, everyone. I'm here to announce a super pointless thing I did in everyone's least favorite DDR game, DDR 2010 for the Xbox 360. Since all of the videos are stored as plain, unencrypted wmv files, all you have to do is replace them with another wmv file with the same title. Most of the songs use an assortment of BG videos stored in the game, but a few of them have their own dedicated videos. For this demonstration I chose Let's Get Away as the selection of songs with their own videos is thin and the only other real choice was ever snow. I guess I could have suffered through The Island Song's horribly synced chart: 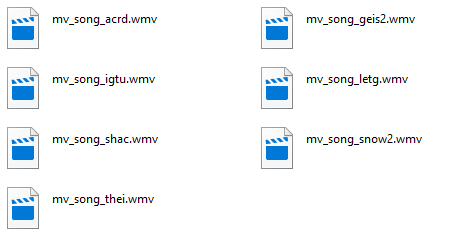 This took a surprising amount of trial and error, specifically because Windows Movie Maker saves wmv files in a codec that the Xbox 360 usually cannot read. That's right: a console from Microsoft can't properly read videos exported by software made by Microsoft. I used the terrible video editing software that came with my capture card to export the wmv and it worked on the first try.
The BG video is terribly sized and is blatantly artifacted. Sorry about that, I saved it over itself maybe twelve times and you can see every single one of those crisp, crisp pixels.
This is of little consequence and I haven't figured out how to edit much else in DDR 2010. Not everything is packed as poorly as these videos are. I just thought this might be fun to try.

Last updated: 2019-07-08 08:37pm
girl i-
edit: do u think u could insert existing official bg videos for some of the songs like sweet sweet love magic or
Download my simfiles!
NEW SIMFILE/EDIT:
ALL MY HEART -この恋に、わたしの全てを賭ける- (Random's Edit)/SUPER HEROINE 彩香-AYAKA-

Last updated: 2019-07-08 09:31pm
Sweet Sweet ♥ Magic uses a scripted sequence of shorter BG videos, so in order to do this I would have to document which videos appear in what order and then cut the official BG video in 15-second increments (or whatever the length of each video is) to sort of fudge the look of the official BG video. Obviously, since DDR 2010 has odd, fancy transitions between videos it probably wouldn't look very accurate. Also, if any of the BG videos repeat themselves this idea is totally void. It would only work for individual cases, since this would result in other songs having their videos from the disc and then one or two sections of the Sweet Sweet ♥ Magic video slapped in there.
In short, not right now.
I think I know where the BG scripts and their directions are stored but I don't even know how to open those files, much less modify them. Each audio file has an accompanying file that is commonly used for audio markers in Xbox software but despite having the entire 360 SDK in my arsenal I have no idea how to open those marker files. Maybe that's a testament to my own ineptitude.
Those markers either delineate what BG videos should appear and when or they simply mark when the sample audio of the song starts and ends on the songwheel. I'm partial to thinking it's the latter.
My best guess is that the video scripts and their transitions are marked in their charts which are stored as (ostensibly) encrypted .sq3 files. I have yet to figure out how to open them.